How Soulja Boy Made $250,000 Dropshipping From Aliexpress(And How You Can Too)

I never thought I’d learn about Aliexpress dropshipping from a mainstream rapper.

But, Soulja Boy has achieved e-commerce success that few of us will ever dream of reaching.

That’s right, the guy with the Gucci logo tattooed on his forehead can teach us about internet marketing.

Frankly I thought it was hilarious the moment I heard of it, and quickly shared the news with all of my entrepreneur friends.

I’ve owned multiple e-commerce companies, so I can always appreciate a good success story — or in this case — a finesse.

Here’s what we can all learn from Soulja Boy to grow our own businesses.

Background on the SouljaGame console

For some background, the rapper announced back in November that he’d be releasing a game console and heavily hyped it up. It was all over major news outlets.

He originally broke the news while livestreaming on Twitch.tv, and people quickly took to Twitter and social media to talk about it.

A rapper releasing his own video game console? It had never been heard before, but Soulja Boy is well known for investing his rap money into business ventures, so I wasn’t surprised.

For about a month I didn’t think about it until I saw it explode all over YouTube. 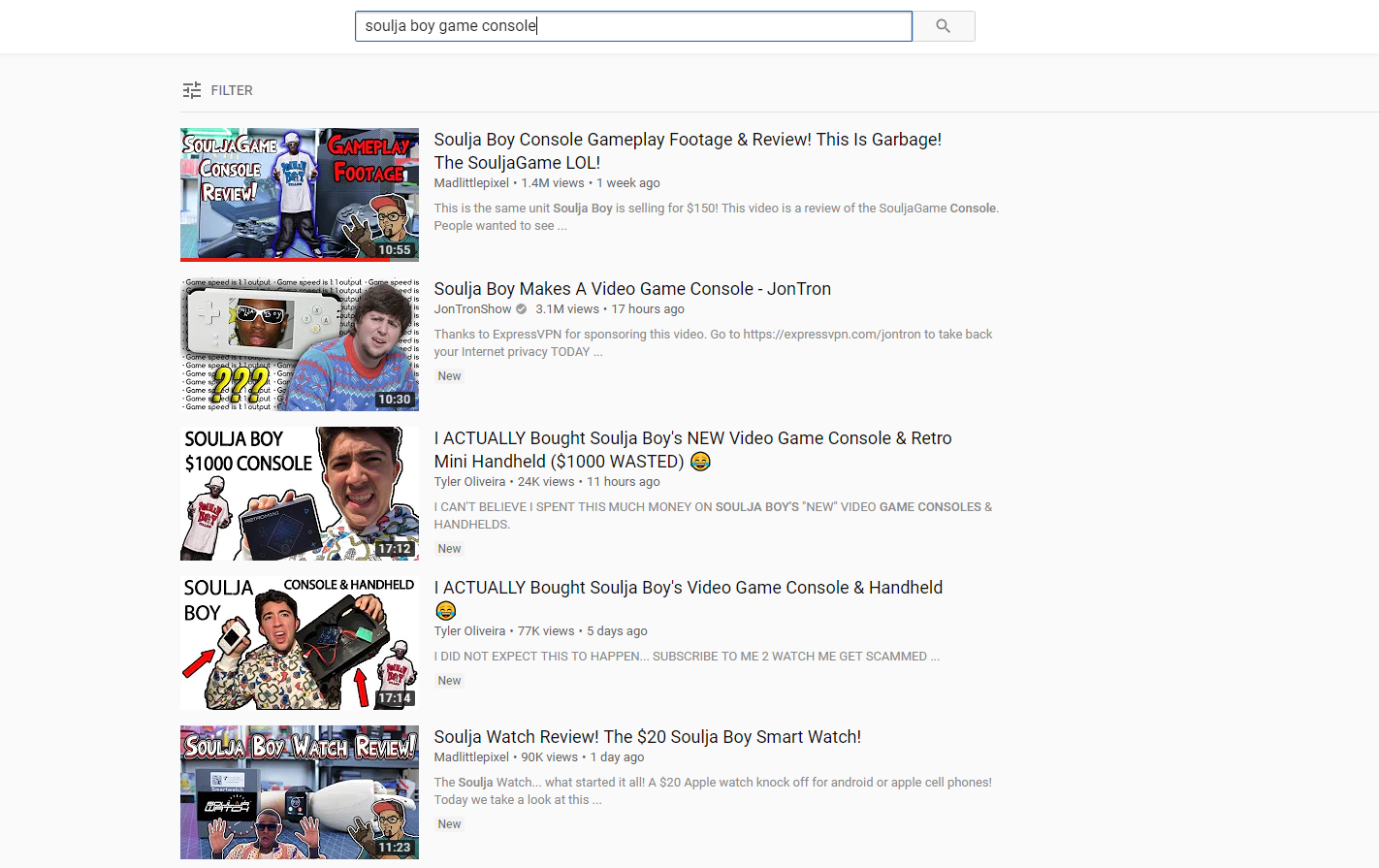 People were doing reviews, tear-downs, and commentary on this seemingly “new” console. At least, so it seemed…

A deeper look into the Soulja Boy game console

As soon as I saw the console that Soulja Boy released, along with its images, some alarms went off.

First of all, I noticed that there was no white labeling done. He didn’t even place a logo on these machines, which instantly made me presume he was dropshipping them.

The images had an Aliexpress vibe if that makes sense. Maybe all of those years dropshipping gave me a 6th sense for sensing crappy Chinese products. 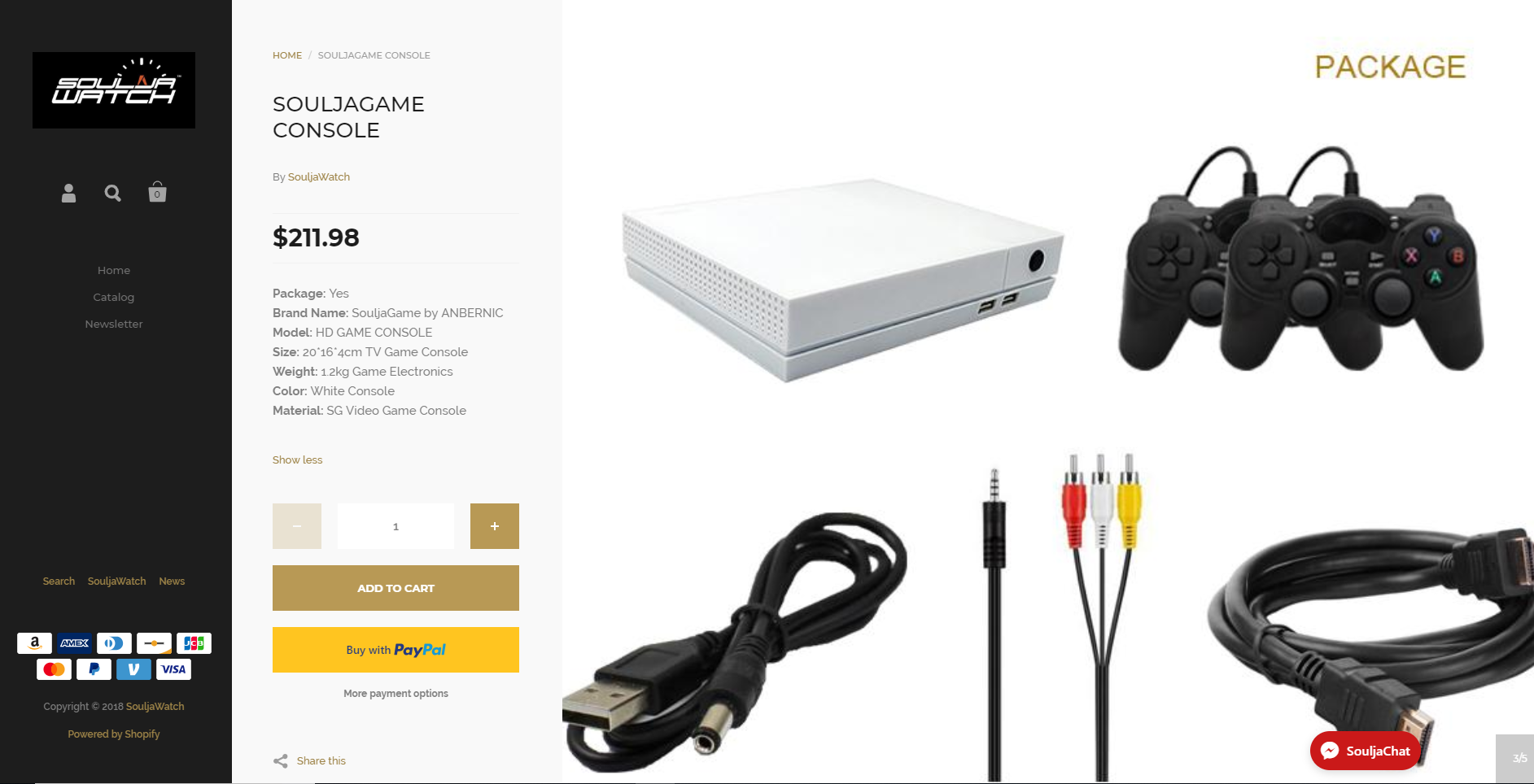 Looking further his store, it appears he’s selling unbranded versions of popular products like Apple headphones, Beats by Dre, and the Apple Watch.

I salute the hustle. 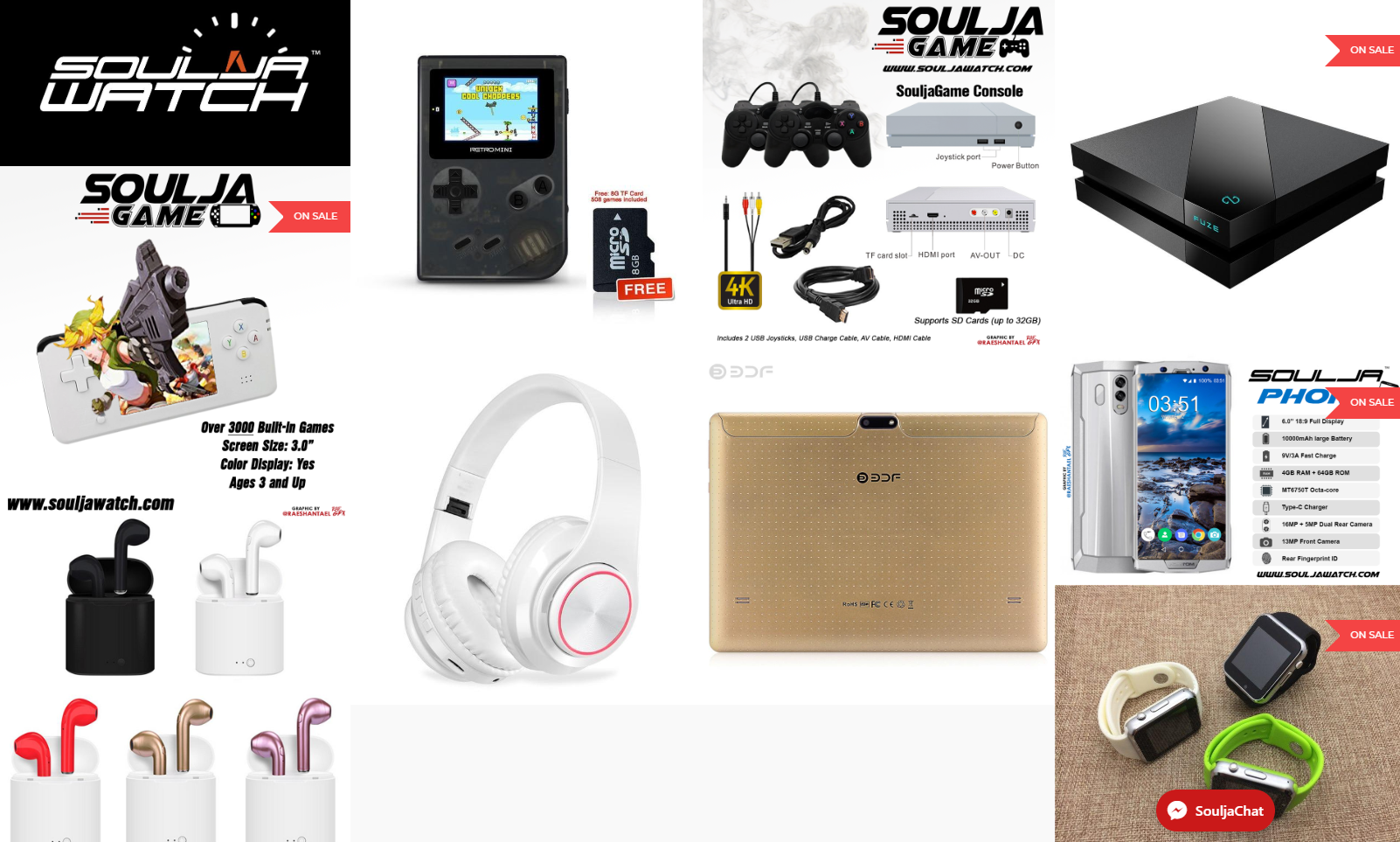 A quick search on Aliexpress for “game console” netted me these results. And what do you know? I see his handheld console 🙂 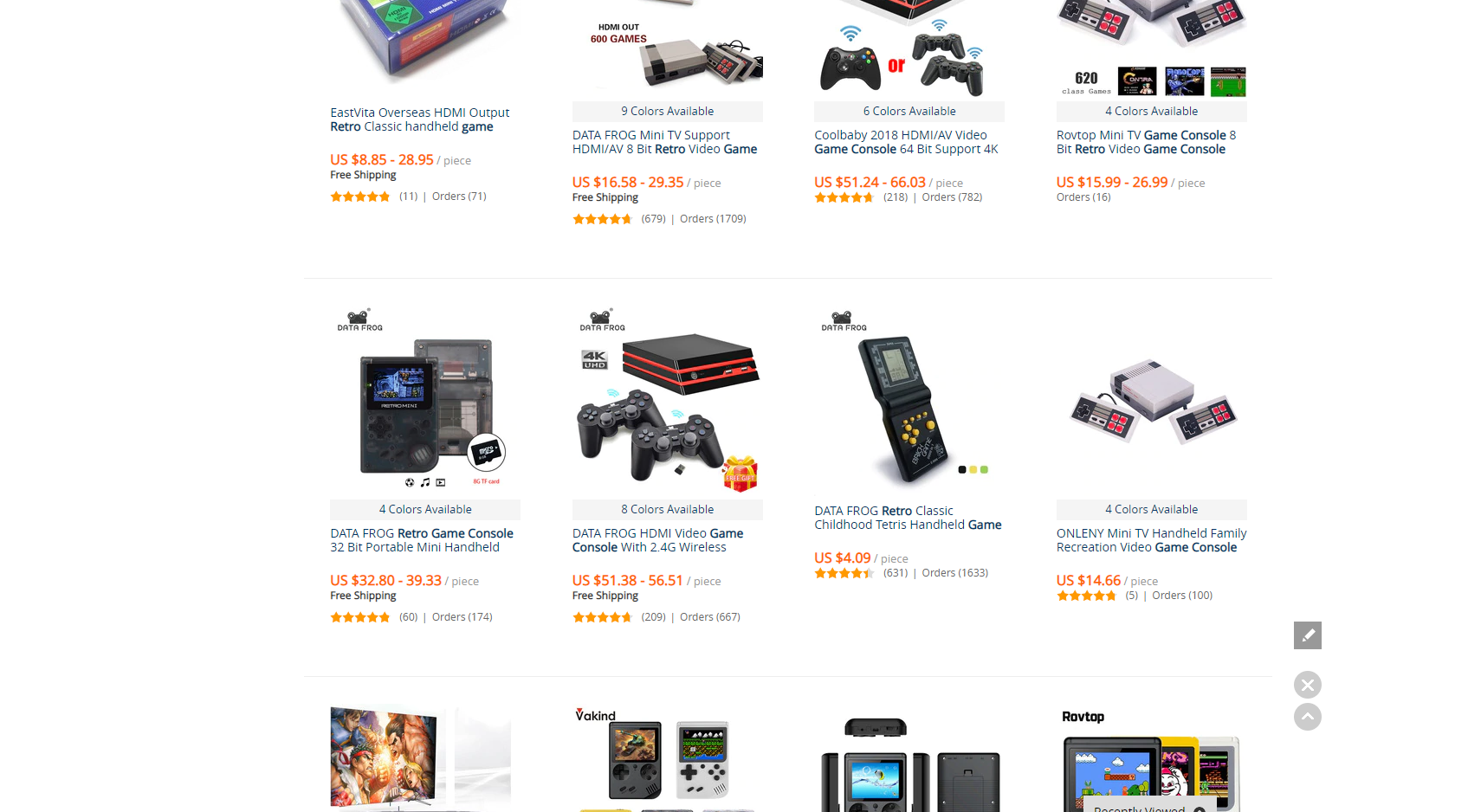 He made $250,000 in just 24 hours after the console was placed for sale. He also claimed on Twitter that he’s generated over $2 million in sales so far. Crazy!

If that wasn’t enough, he is now being mentored by the professional gamer Ninja on how to create a professional e-sports team.

This whole story is a rollercoaster, but there’s plenty to learn from Young Drako. Here are the main takeaways from his success that you can use to skyrocket your e-commerce sales.

54% of purchases are driven by word of mouth. While we have social media, email, SEO, and other mediums at our disposal to reach customers, nothing beats going viral.

Okay, maybe it isn’t that simple, but you get the point.

Leveraging a viral campaign can be one of the best things you’ll ever do for your e-commerce business. Here’s how to pull it off.

Step 1: Decide on the overarching theme

Campaigns can be done in many different ways.

Are you releasing a product that’s going to shake the market? Are you bringing awareness to an important social issue? Are you doing a massive giveaway?

There needs to be a main premise or reward behind the campaign for it to go viral, so decide on that first.

One of the best ways to create a viral effect is to implement user generated content to increase engagement and get users talking about your brand.

Look how Taco Bell pulled this off with their own Snapchat filter during the 2016 Cinco de Mayo, racking in 224 million total views. 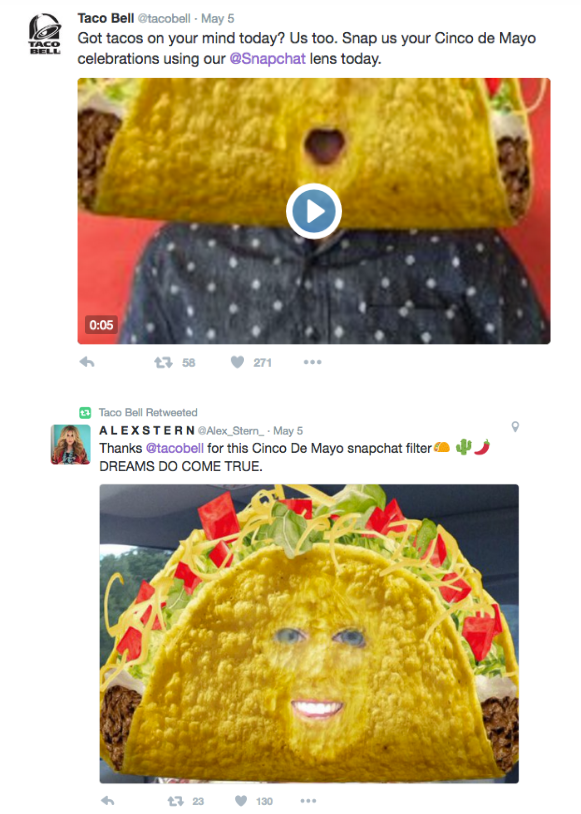 People would use the filter and then Tweet or mention Taco Bell in their social media posts.

It’s proven that consumers are craving deeper relationships with brands more than ever. It’s easy to understand why, too.

We’re bombarded with ads and intruding marketing tactics all day. It’d be nice to genuinely be involved with the companies we’re purchasing things from for once.

While you might not have the budget to pull off what Taco Bell did, you could easily do a giveaway with a branded hashtag.

Ask followers to tag their friends and share the post to be entered, and you’re bound to get at least a small viral effect going.

People trust influencers more than friends or celebrities these days.

Getting someone involved with a big following can give your campaign a HUGE jump start. Imagine if they have 10,000 dedicated fans. That alone would put your brand in front of a much larger audience.

Do you remember those Old Spice commercials with “the man your man could smell like?”

That has to be one of the best examples of a viral campaign ever, and one of the reasons it was so successful was because they leveraged influencers. The Old Spice guy would film short videos responding to people like Ellen DeGeneres.

Those celebrities would then share the videos or respond to them, giving the campaign that much more attention.

So, you don’t even need to hire influencers if you don’t want to. You just need to get them engaging with your content and the rest will be history.

Customer retention can boost your profits by 25-95%. This means that if you treat your customers right, they’re going to make repeat purchases and generate you more revenue in the long term.

Think about Soulja Boy for a second. The man has millions of fans that follow him on social media and eat up anything that he’ll throw out.

It’s the same reason Tony Robbins can sell a seminar ticket for $10,000 and have 1,000 people show up. It’s the power of branding.

When you have a true loyal following, the ways you can monetize it is endless.

And, guess what? People buy it!

The main thing you can do to cultivate this kind of fanbase is to consistently put out content, whether that’s on your blog, YouTube, or via a podcast. Collect emails, be active on social media, and engage with people.

It won’t happen overnight. It will take years. But once you have that following, you’re set for life.

When Soulja was sitting in his mansion thinking of his next business venture, do you think he was worrying about white labeling, inventory, and all that extra stuff?

He kept things simple. That’s why he dropshipped off of Aliexpress, kept his costs low, and now he’s making millions.

That’s the definition of an MVP(Minimum viable product).

Now that he knows that he can get rich off of selling electronics, he can now do all of the “extra stuff.” Soulja can put his own label on it, create a branded package, and maybe get it into stores.

It’s always wise to test your ideas in the market to see if they have potential. As Tim Ferris says, don’t get stuck in analysis paralysis. A.K.A sweating the details before you’ve even begun executing.

If you want to start a dropship business, stop losing sleep over the logo, user experience, and other BS. Upload some products, setup PayPal, buy Facebook ads, and see if your idea works.

You can optimize all of the details later.

Mark that shit up

You really think you’re going to be the next Bill Gates by making $5 profit per sale? Not gonna happen.

Soulja Boy is making around $100 profit per console, meaning that he only needs to sell 3 per day to make six figures.

It’s all about scale. You would need to sell 20 $5 products to make what he earns from a single purchase.

If you’re dropshipping from Aliexpress, you need to mark up the prices considerably or you’re not going to generate any significant revenue.

It doesn’t have to be crazy profit margins, either. From my experience it should be anywhere from $25 to $50 minimum. If you’re in a niche where you can’t be making those kind of margins, I’d be looking for the quickest exit.

I never imagined myself writing an article on how Soulja Boy would be dropshipping from Aliexpress, but I had a lot of fun putting this together.

If you want to recreate some of his success, focus on creating some form of viral campaign. User generated content, branded hashtags, and giveaways are great ways to begin. Get influencers involved to give it a boost, too.

Then, in general you should prioritize building up a loyal fanbase. Putting out high quality content on a consistent basis is what all of the most successful people do to achieve this. It doesn’t matter if It’s Gary Vaynerchuk or the FaZe crew.

For the beginners, don’t worry too much about the details of your e-commerce venture, too. Just get the store launched, products ready, and you can do A/B split tests later. I also highly suggest only selling products with high profit margins, or you’re going to have difficulty making a living.