Billboard Advertising – Is It Worth Your Time and Money?

Billboard Advertising – Is It Worth Your Time and Money?

With people like Gary Vaynerchuk saying traditional media is dead, it’s easy to think channels like billboards are a thing of the past.

However, billboard advertising is still very much alive.

Heck, 71% of people will look at and read a billboards message while driving.

But if you want great results, you need to design and place your billboard properly. Otherwise, you won’t get any leads or sales, and you’ll waste a ton of money.

This is why today you’re going to learn how to create a billboard that generates sales, average costs, and case studies of successful billboard marketing.

If you’re going to drop some serious dough on a billboard, it better damn work!

I can spout all of the data and stats at you, but let’s look at some real life examples of how businesses used billboards to their advantage.

When I think Hennessy, I think rap music videos. But, that’s a topic for another day.

In recent years, Hennessy ran into the problem of not knowing how to advertise to their growing younger crowd.

While they are the #1 selling cognac in the United States, their sales started to slightly fall and they needed to act fast.

They were struggling to remain relevant to aging customers, and at the same time targeting the youth.

Hennessy developed the “Never stop. Never settle.” mantra, along with the concept of a “wild rabbit.”

This was to show that the brand never stopped or settled to be the best, and would constantly innovate. 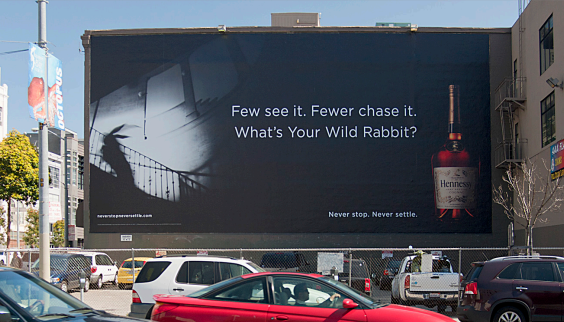 Here is one of the billboards they used to create buzz and attract news stories. It got consumers interested and people talking about the brand.

They were placed in Los Angeles, New York, Miami, Chicago, and San Francisco.

Hennessy’s sales increased by 7.5% because of this campaign.

In 2015, Burger King aimed to drive more customers to their physical locations through sales promotions.

They decided to tie their advertising to a local NFL team to make the campaign more interactive.

Burger King began sponsoring the Arizona Cardinals, and used their sponsorship as an opportunity to promote their new $1.20 chicken sandwich.

They placed 11 digital billboards in high traffic areas around Phoenix, Arizona that targeted sports fans. These all lead to the nearby 96 locations, as well.

Customers could purchase the chicken sandwich on certain game days or the day after if the Cardinals scored 20 or more points.

Some of the billboards also promoted their 2 for $5 combo, and the overall campaign was a smashing success.

2014 to 2015 was a historic time in college football. It was the first ever time that postseason was made up of a four team playoff.

This was much different than the original system that every knew, where two teams were selected to play in a championship game.

Why does this matter?

Because ESPN knew it mattered to their customers and needed a way to inform them of this important change.

In 2014, a committee would select teams based on strength, records, and other factors to determine which four teams would make it to the semifinals.

ESPN’s goal was to ensure fans knew of this change and to increase their on-air ratings for the national game and semifinals.

Since they wanted to guide customers to games, which were on a tight schedule, ESPN opted for digital billboards ot maek changing the message easier. 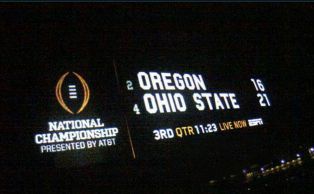 Billboards were placed in strategic locations that would drive the most traffic to games. Live scores were also displayed to promote more people to tune in.

The results? The college playoff semifinal games achieved the highest rating ever in cable history.

The Rose Bowl received a 45% increase in average rating compared to the last year.

The Sugar Bowl also saw an insane 130% increase in ratings over the previous year.

Billboard marketing, works. There’s no doubt about that in anyone’s mind.

However, it can take a hefty budget to pull off.

It’s location based, but you could potentially be putting your brand in front of the eyes of tens of thousands of people or more per day — hence why it can be expensive.

Here are some average billboard prices in major cities, for example:

Let’s consider a few things that will play into the price you pay.

Size of the billboard

Larger billboards will catch the eyes of more people. If more people see your advertisement, you can potentially generate further revenue.

This is why you’ll be paying higher monthly rates for large billboards.

On the flipside, you can keep costs lower but investing into a smaller sign. Smaller ones can sometimes be as low as $500 per month, which is very affordable.

If people can’t see your billboard, how will they know what you do?

That’s where lighting comes into play.

Obviously the morning and afternoon isn’t the only time people are driving and walking around. That’s why it’s also suggested to think about getting lighting to ensure your billboard is seen 24/7.

This will come at an added cost, but might be worth the investment if you believe it will get you more customers.

It’s common for billboards near competitors to be offered at a lowered rate.

The distance limit may be anywhere from 500km to 1,500km depending on where you’re located.

As I like to say, you can always beat your competition with better marketing, so I wouldn’t get discouraged if you can only advertise near other businesses.

If you make a better billboard, which you’ll learn to ahead, you can be stealing all of the customers away from them.

This is similar to location, but slightly different.

The visibility of your billboard dictates how easily it can be seen by drivers, meaning that the right hand of the road is always better, but more expensive.

Signs on the left side of roadways tend to be cheaper, since they’re more difficult to read from afar.

Expect to pay more the closer the billboard is to a central location, highway, road, etc.

How to make a great billboard

96% of people are exposed to out of home advertisements, such as billboards, on a weekly basis.

Imagine the amount of people you could be promoting your business to if you placed one in the right location.

But, that’s only half the battle. You need to treat it like any other form of advertisement.

Follow the steps ahead and you’ll create a billboard design that racks in the cash.

Use a relevant and eye catching visual

A picture is worth a thousand words.

Images in marketing are one of your greatest tools in getting attention and spiking emotions.

65% to 85% of the population are visual learners, which means most individuals will be able to take in pictures faster and better than text.

The key to a good image is also one they can relate to in either a positive or negative way. Let me explain.

You want to get emotions riling, and that can be done on either ends of the spectrum. While we’re talking about billboards, look at this website as an example.

They help people get out of debt, and use a photo of a couple looking sad while holding a credit card. It’s easy to presume this strikes a nerve with their target audience that’s in debt and is experiencing similar emotions.

On the flip side, this business that offers the same services uses the image of a happy family — allowing the customer to imagine themselves being after becoming debt free.

With that being said, consider how you could use images in your billboard advertisement to hit the emotions of your customer and to relate to what they’re feeling or would like to feel.

I recall several times while I was driving to a meeting, the gym, or elsewhere and I’d see billboards that just sucked.

Seldom was it the image, but rather the copy.

It didn’t explain anything.

It was all about them and not the customer.

And if your writing stinks, how do you expect to build any interest?

You can out-do the competition and get a hell of an ROI with billboards with some basic copywriting techniques. Here’s what you need to do.

Keep it short and sweet, while tending to what they want

There’s an age old strategy of focusing on benefits over features.

Sure, you’re a financial adviser with over 20 years of experience. Who cares?

Oh, wait. You can help me pay off my student loans in X amount of time, retire several years earlier, or build an investment portfolio with a four figure monthly return?

That’s what we call benefits. The feature of a product or service is factual and boring information. It’s usually mandatory, but we skip it most times on a billboard.

Once again, we’re trying to connect with the customers emotions and primal desires.

Since most people walking or driving by your advertisement aren’t going to plop down a chair and read it like a Monday newspaper, it’s gotta be short.

A single sentence at maximum is usually all you need, and that brings me to my next point.

Use a call to action

That’s why calls to action are such a staple in all realms of marketing.

You can hook, line, and sinker someone, but the cherry on top to push them over the edge is telling them to take a specific action.

A call to action can be as simple as:

Offer an incentive or UVP

Why should a customer choose you over competitors?

There needs to be a unique value proposition or you’ll blend into the sea of other businesses that offer the same service.

The message on your billboard needs to instantly tell the person looking at it what makes you special or worth contacting.

An incentive for reaching out to you can include a free consultation, audit, or quote. This gets their foot in the door, while providing that extra value that puts you ahead of the competition.

Marketing with a billboard can be a fantastic strategy for increasing brand awareness and generating leads.

There are important things to consider before you dish out the cash, though.

Firstly, the size, location, visibility, and other factors are going to play a role in monthly rates. Expect to pay more for larger signs in higher traffic areas.

Try to find a middleground where you can place a billboard that’s near your target demographic, but doesn’t break the bank.

Secondly, the design of your billboard will make or break the success of your campaign. Begin by using an image that speaks to your ideal customer. This shows that you understand their situation, and also brings out emotions related to the service you offer.

Your copy also has to be top notch. If you need help with that, feel free to contact me. If you write it yourself, ensure that you focus on the benefit of working with you, followed by a call to action. Keep it short, too.

There also needs to be a value proposition that makes you come out on top, like a free consultation or quote.

Do these things and I’m confident that your billboard marketing campaign will rack in some serious dough for your business.